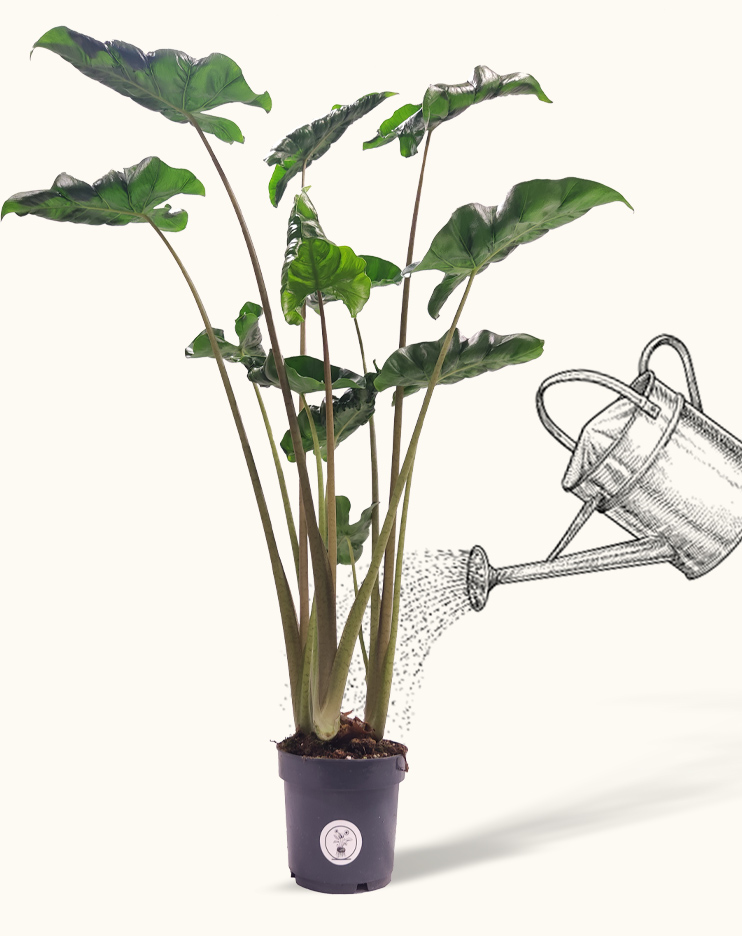 Part of the most original Alocasia, the Regal Shields distinguishes itself with very dark leaves and a velvety surface. Both this coloring and the shape of the leaves make it look like a shield, which gave probably gave it its name.

Origin : South-East Asian rainforests (mostly from Bornéo).
Personality : Likes a little attention.
Earmark : Originally shaped, dark green leaves, with velvety reflections, making it almost look like silver shields.
Say something smart : The Alocasia Regal Shields hasn't been discovered, but created in 2007 in Florida. It was then officially added to the list of Alocasia varieties in 2013, making it one of the most recent hybrids, born from a marriage between Alocasia Reginula & Alocasia Odora.

A planter usually looks nice, but we recommend not to plant your new baby directly in one.
Leave it in its current pot until Spring, then ideally transfer it into a terracota pot with little drain holes when it looks cramped.

Brightness : Good level of brightness, but no direct sun. It is even able to survive some time in a low brightness environment.
Avoid letting it feel draughts near the windows and take it away from heating sources.
Humidity : 60 % or more.
Tip : Spray around its leaves with water (ideally rain-water) once a week.
Tip 2 : Place some wet clay pebbles under the pot, so they keep diffusing humidity.
Temperature : Best is to keep it in a stable environment, where the room temperature oscillates as little as possible between 20 & 25 degrees celsius.

Watering (purely indicative, depends on your local environment): once a week in Spring/Summer, and once every 10 days in Autumn and Winter.
Tip : Put your knuckle in the ground. If it feels totally dry, add some water to keep the soil wet (but not soaking it).
Fertilizer : Once every other week, from June to October

Good to know : It isn't uncommon that an older leaf, smaller or lower than the other ones, becomes yellow, brown and dies, especially when new ones grow out. Don't panic, it is just a continuous refresh! Simply cut the leaf once it has completely died out, so the plant can focus its energy on growing the new one.

If the plant's environment changes or doesn't fit with its needs anymore, it is also possible for it to enter into dormancy, which means all leaves will start dying. This doesn't mean it is dead, let the leaves totally die out and then cut them. Leave the bulb where it is and keep giving it water once every 10 days. It will grow again from there !